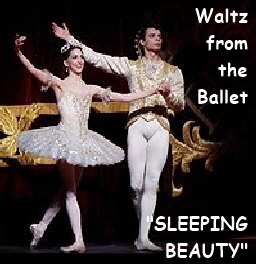 HEMIOLA:  Hemiola simply put in mathematical terms can be expressed as a ratio of 2 to 3;  2:3 or 3:2 (same thing).  In music the Hemiola Effect happens in two different ways..

First (example 1) is where there are 2 written or played notes (of the same value) played in the span of 3 even beats..

Second (example 2) is where there are 3 written or played notes (of the same value) played in the span of 2 even beats.

In the music from “Sleeping Beauty” (example below)  the hemiola effect is like example #2.  Why?...  Because in a fast Waltz tempo often the dotted half note becomes the beat or basic pulse (playing the waltz in 1: one count to the measure) and therefore we have 3 half notes in the melody over 2 dotted half notes as the beat. 3:2

The Hemiola Effect can also be created by grouping notes using accents, articulations, or melodic patterns.  An example of using a melodic pattern to create a hemiola effect is at the end of piece (measure #77). The notes go back and forth in a two note pattern as if the time signature was 2/4 or 4/4.  Also, look at the rhythm subdivisions in each example.  In example 1 there are 3 sets of eighth notes grouped buy a long tie to make two groups of  three.  In example 2 there are two sets of eighth note triplets grouped by ties to make three groups of two.  In each case there are 6 notes in the subdivisions;  6 being the product of 3X2 and the lowest common denominator of 3 and 2.

FINDING MUSIC FOR YOUR INSTRUMENT